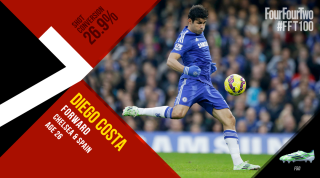 As part of FFT's annual Best 100 Players in the World compilation, Diego Costa heads the list of Blues representatives – seventh overall – after a stellar 12 months.

The Brazil-born hitman plundered 27 goals for Atletico Madrid in 2013/14, helping them win a first La Liga title since 1996 and reach the Champions League final.

And he has made a seamless transition into English football, bagging 11 goals in 10 Premier League outings as part of an all-conquering west London outfit.

Costa is joined by Cesc Fabregas, who assisted 10 goals in just 12 league games, faster than any other player in a single Premier League campaign.

While the Spaniard's midfield partner Nemanja Matic sneaks in ahead of Manchester City's Vincent Kompany after some domineering displays in front of the back four for Jose Mourinho’s men since returning to the club from Benfica.

The quintet of high-ranking Blues is completed by Eden Hazard and Thibaut Courtois; another man who swapped Atletico for Stamford Bridge in the summer and – handily for a goalkeeper – has fitted into his new surroundings like a glove.

Eight Chelsea players feature in the full 100, the most of any Premier League team and bettered only by Juventus, Barcelona, Real Madrid and Bayern Munich.