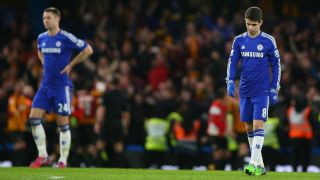 Guus Hiddink has told Chelsea to heed the warning of last year's FA Cup embarrassment against Bradford City when they host Scunthorpe United in the third round on Sunday.

Chelsea were heavy favourites to defeat Bradford in the fourth round last January, with the club at that time still on course for a quadruple of trophies.

The match was going according to the script as goals from Gary Cahill and Ramires put Chelsea into a 2-0 lead at Stamford Bridge.

However, the underdogs upset the odds with a rousing comeback as League One club Bradford recorded a famous 4-2 victory.

And interim manager Hiddink has warned that a repeat result will not be tolerated, saying: "I didn't see it [the Bradford defeat] but I know we must not stumble again.

"We take all the opponents very seriously, my team and myself. I think they are dreaming of getting a good result. We are well aware of who is playing and who can cause danger. We take it seriously."

Hiddink returned to Stamford Bridge following the dismissal of Jose Mourinho last month and the FA Cup is a trophy that harbours special memories for the experienced coach.

During his first stint in charge in 2009, Hiddink led Chelsea to FA Cup glory in a 2-1 victory over Everton.

With Chelsea's chances of retaining the Premier League remote, Hiddink has identified winning the FA Cup as a target.

"[The FA Cup means] a lot because at that time it was the only silverware I won in this country," he added. "Fourth place in the Premier League is difficult, but one target is the FA Cup."

Scunthorpe, who were beaten 3-1 by Chelsea in the third round in January 2005, are 15th in League One after 25 matches and are huge outsiders for this weekend's contest.

Manager Mark Robins conceded Scunthorpe have little chance if Chelsea, who are 14th in the Premier League, play at their best.

But the 46-year-old, who is often credited with saving Alex Ferguson's job during Manchester United's FA Cup triumph in 1990 after scoring the winning goal in a third-round win against Nottingham Forest, insisted his team have no fear.

"We know it's going to be tough because the likelihood is, if Chelsea turn up, we'll lose," he said. "That's not necessarily all it's about though. We want to get through, so we're not going there with a defeatist attitude, that's for sure.

"We know we're playing against world-class players and we're going to have to be absolutely 'bob-on' all game."