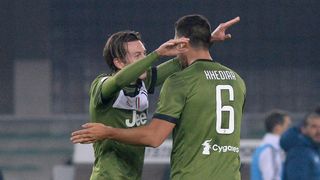 Juventus leapfrogged Napoli at the summit of Serie A as they edged past nine-man Chievo 2-0 at the Stadio Marc'Antonio Bentegodi on Saturday.

Massimiliano Allegri's side were some way from their best during an insipid first-half display, but received a boost ahead of the second period when Chievo's Samuel Bastien received a red card for two quick-fire bookings.

Chievo's woes were then compounded after 60 minutes as Fabrizio Cacciatore received a straight red card for dissent.

The defender's stupidity was duly punished just moments later as Sami Khedira broke the deadlock with his first goal since a hat-trick against Udinese in October.

Gonzalo Higuain ended his six-game goal drought to secure victory with two minutes to play, a triumph means that Juve have now won their last six Serie A games, conceding just one goal.

That run means they now hold a two-point lead over Napoli, who can return to the top of the table on Sunday when they host Bologna.

Gianluigi Buffon, who celebrates his 40th birthday on Sunday, received an early present in the shape of a place on the substitutes' bench - his first involvement in a matchday squad since the 1-0 win over Napoli on December 1.

His presence did little to inspire Juve during a turgid opening half hour, though, with Douglas Costa producing their only effort of note – a whipped effort that flashed past Stefano Sorrentino's right-hand post.

Higuain attempted to spark his side into life, but could only scuff an effort into the grasp of Sorrentino from the edge of the penalty area.

Chievo's hopes of securing anything from the game were dealt a significant blow 10 minutes before the interval when Bastien received his marching orders. The Belgian picked up two yellow cards in the space of just over two minutes, the second for an inexplicable tug of Kwadwo Asamoah's shirt.

The last action of a desperately poor first half was Khedira's low drive, which was comfortably gathered by Sorrentino.

The expected Juve onslaught failed to materialise in the early stages of the second period, with the 10 men of Chievo holding them at bay with surprising ease.

The visitors did come close to breaking the deadlock in the 53rd minute as Mario Mandzukic clipped a first-time drive towards goal after smart play down the left by Costa, Sorrentino once again equal to the effort.

Cacciatore's moment of madness on the hour then truly handed the impetus to Juve, who duly took the lead just six minutes later.

Substitute Federico Bernardeschi calmly pulled back into the path of Khedira, who drilled a superb half-volley past Sorrentino for his fourth league goal of the season.

Juve added something of a gloss to the scoreline with just two minutes remaining as an unmarked Higuain met Costa's cross to send a header into the bottom corner and his side to the top of the table – for one night at least.

- Each of Sami Khedira's last six Serie A goals have been scored away from home.
- Gonzalo Higuain found the net after a 706-minute goal scoring drought in Serie A.
- Chievo had just one shot - by Cacciatore in the 60th minute – at least two fewer than any other side in a Serie A game this term.
- Juventus have conceded just one goal over their last 13 games in all competitions (none in the last four).
- Chievo are just the second side to receive two red cards in a Serie A game this term, after Genoa v Inter Milan last September.