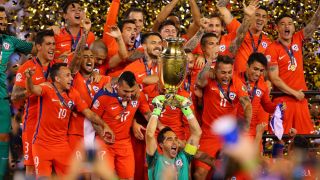 CONMEBOL president Alejandro Dominguez claims UEFA has agreed in principle to revive the Intercontinental Cup and introduce two new showpiece games, including a play-off between the Copa America and European Championship winners.

Last staged in 2004, the Intercontinental Cup was contested by the winners of the Copa Libertadores and the Champions League, South America and Europe's premier club competitions respectively.

FIFA's Club World Cup also pits the holders of each continent's top prize against one another, but Dominguez believes there is scope for the one-off match to return.

The Paraguayan also wants fixtures between the Europa League and Copa Sudamericana winners, as well as a game featuring the European Championship and Copa America holders.

"We are talking to UEFA about reissuing the Intercontinental Cup and a new cup to be played between the champion of the Europa League and the champion of the Copa Sudamericana, from August next year," Dominguez told Radio Monumental 1080 AM in his homeland.

"There is already a verbal agreement of terms and now we have to take that forward. As it is a unique project, we will have to look for the venues, the sponsors and that takes time to work.

"They are looking for the possible scenarios, seeing the best place and who is going to sponsor the event.

"The great objective is to get a very good venue, with very good sponsors who are interested, that the payment to the clubs is great.

"The political decision between [UEFA president] Aleksander Ceferin and Alejandro Dominguez is made, and from there the general secretaries of both confederations have begun to work for this project.

"We are very excited about it within both confederations.

"The word is given, committed by both parties, and the organisational part must materialise this idea."

"It is a lot of organisational work. I think it is going to happen, but they are in the earliest phase of the work."