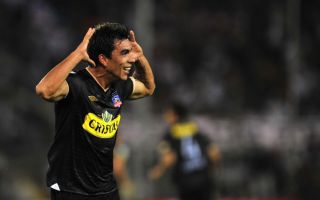 Hector Tapia's men have won nine of their opening 10 league games and sit six points clear of Universidad Catolica, with O'Higgins third a further point back.

Colo Colo needed 33 minutes to go ahead at Union La Calera as Felipe Flores headed in from a set-piece.

Paredes sent Juan Ojeda the wrong way from the penalty spot a minute before half-time to make it 2-0.

Pavez found the bottom corner with a left-footed strike from inside the area just before the hour-mark and added another with a tap in on 70 minutes.

Paulo Rosales scored for the hosts seven minutes later before Paredes had more joy from the penalty spot to complete the rout.

Paredes, 33, has scored nine times in the league this season, although four of them have come from the penalty spot.

Universidad Catolica battled to a 2-0 win over bottom side Rangers on Sunday thanks to goals from Dario Bottinelli and Milovan Mirosevic.

O'Higgins returned to winning ways with a 1-0 victory at home to Universidad Chile and fourth-placed Palestino edged Huachipato 2-1.

Luciano Vazquez went from hero to villain for Nublense, opening the scoring before being sent off in their 1-1 draw at Santiago Wanderers.

Ever Cantero netted twice in Cobresal's 2-0 win at home to Everton and Universidad Concepcion and Antofagasta played out a 1-1 draw.