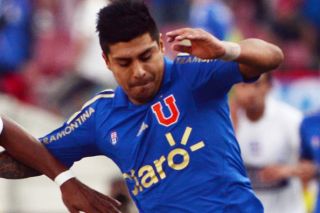 A powerful header from Patricio Rubio with four minutes remaining clinched victory for Universidad after Carlos Retamales' stunning equaliser had given Everton hope of a draw in the 77th minute.

At the Estadio Santa Laura, Universidad took the lead in the 36th minute when Rodrigo Rojas found Gustavo Lorenzetti on the left-hand side of the box and the 28-year-old winger dinked a cross over Everton goalkeeper Gustavo Dalsasso for Isaac Diaz to chest the ball home.

Retamales sent Everton level when he chested Moises Vasquez's deflected cross down and sent a rasping half-volley into the bottom corner of the net with 13 minutes left but the visitors could not hold on.

In the 86th minute, the home side got the ball into the box and Rubio muscled his way in front of his marker to send a strong header inside the near post.

With Colo Colo having maintained their unbeaten start to the season with a 3-1 triumph against Rangers on Friday, Universidad Catolica kept the pressure on the league leaders with a 7-1 thumping of Huachipato on Saturday.

Alvaro Ramos struck a brace for Catolica as they registered their third win in four games, while Milovan Mirosevic, Mark Gonzalez, Enzo Andia, Jonathan Bottinelli and Ramiro Costa also got on the scoresheet for the victors.

Colo Colo lead the Primera Division on 19 points with Catolica (16 points) in second, while Apertura champions O'Higgins (15) are third after seven rounds of the Clausura season.

O'Higgins trumped Nublense 2-0 on Sunday with Fernando Gutierrez and Pablo Hernandez scoring either side of half-time, while Palestino sit fourth, one point further back, following a 3-2 win at Union La Calera.