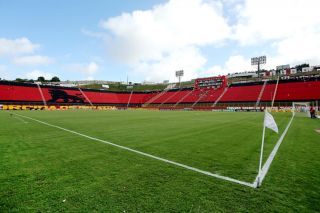 Coach Hector Tapia was criticised by club president Arturo Salah only seven games into the Apertura phase, but Tapia's men responded in the best possible way with a convincing road win to make it four straight league victories.

The visitors to the Estadio Elias Figueroa Brander in Valparaiso were 2-0 up courtesy of quick-fire goals to Emiliano Vecchio and Jean Beausejour.

Shortly after doubling their advantage, though, Beausejour turned villain - sent off in the 34th minute for lashing out at Palestino's Leonardo Valencia, who was in the process of fouling Beausejour by holding him back.

Cesar Valenzuela scored a consolation goal for the hosts in the 86th minute.

Colo Colo are just three points behind leaders Universidad Chile, who were narrow 1-0 winners over Universidad de Concepcion thanks to a Gustavo Canales goal.

Santiago Wanderers snapped a two-match losing slump with a 4-1 thrashing of Cobresal.

Jorge Luna struck early for Wanderers, before Marco Medel doubled their lead in the 64th minute.

Roberto Gutierrez made it 3-0 before Cobresal pulled one back via Cristian Ledesma, only for Gutierrez to complete his brace in the 79th minute.

Universidad Catolica won for the first time in eight matches in all competitions, beating San Marcos 2-0 courtesy of a Jose Munoz brace - although the match-winner was sent off in second-half injury time.

Union Espanola climbed into fifth with a 3-1 win at O'Higgins, while Audax Italiano and Barnechea enjoyed valuable 1-0 road victories at Cobreloa and Nublense respectively.

Antofagasta came from two goals down to draw 2-2 with 10-man Huachipato, who fell to fourth accordingly.