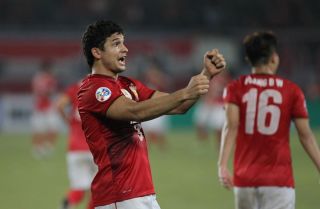 The Brazilian scored a superb treble on Wednesday to keep Evergrande at the top of the table in emphatic fashion, the defending champions taking their tally of league goals for the season to 30 in just nine games.

Muriqui and Rene Junior were also on target for Marcello Lippi's men as they went three points clear at the top ahead of Beijing Guoan, who moved into second by beating Jiangsu Sainty 1-0.

A 61st-minute strike from Chen Zhizhao secured a seventh league victory of the season for Beijing as Jiangsu slipped to a fourth straight game without a win.

However, two other of the early frontrunners suffered setbacks as Shandong Luneng and Guangzhou R&F both failed to win.

Shandong slipped to third with a surprise 1-0 defeat at Changchun Yatai, while Guangzhou were held to a 0-0 draw by Shanghai Shenhua.

Hangzhou are up to sixth after extending their unbeaten run to three games with a 2-0 victory against Tianjin Teda.

A second-half double from Brazilian Anselmo Ramon made sure of the points for the hosts Hangzhou, who have now lost just one of their last five matches.

Harbin Yiteng claimed their first point of the campaign by drawing 1-1 at Henan Jianye, an 81st-minute equaliser from Australian midfielder Adam Hughes earning a share of the spoils for the league's bottom club.