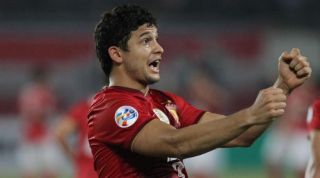 The three-time defending champions of China were knocked out of the quarter-finals of Asia's premier club competition by Western Sydney Wanderers on Wednesday.

That was despite winning the second leg 2-1, with Guangzhou's away goals defeat ending their chance of retaining their crown.

But Marcello Lippi's side quickly responded on their return to league action as four second-half goals helped them to a thumping home win.

Elkeson opened his account in the 25th minute, Alessandro Diamanti netted and the Brazilian was on target again just after the break.

Rene Junior and Alberto Gilardino then scored before Elkeson wrapped up the rout with seven minutes left, with his 20th league goal of the season.

Harbin went down 2-0 at the second-placed Beijing Guoan, who remain three points behind Evergrande.

Montenegro forward Dejan Damjanovic scored in both halves for Beijing.

The title race appears to be a two-team race after Shanghai SIPG, who sit third, fell to 10 points behind the leaders with seven matches remaining.

SIPG played out a 1-1 draw at local rivals Shanghai Shenhua, with Zhu Zhengrong getting their equaliser with 24 minutes to play.

At the other end of the table, Henan Jianye remain just goal difference ahead of Liaoning after losing 2-1 to Shandong Luneng.

Dalian Aerbin, who are one point adrift of safety, will be pleased with a goalless stalemate against Guangzhou R and F.