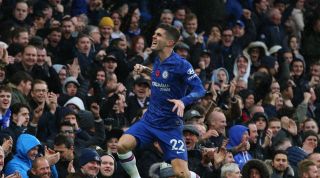 Former Borussia Dortmund midfielder Nuri Sahin insists Christian Pulisic does not need to be the "next Eden Hazard" at Chelsea.

Pulisic has been in fantastic form in recent weeks, scoring five goals in his last three Premier League appearances - including a perfect hat-trick in a 4-2 defeat of Burnley.

The United States international was eased into the team by Frank Lampard after a busy summer in which he helped his country reach the Gold Cup final.

Lampard has defended his decision to hold Pulisic back, pointing to the need for the winger to adapt to the Premier League.

Former Liverpool loanee Sahin, who played alongside Pulisic at Dortmund, believes the teenager will be a long-term success at Stamford Bridge.

And he does not think the American needs to be compared to be Hazard, who left Chelsea for Real Madrid in the summer.

"I don’t think it was a tough start, he just had to settle in,” Sahin, who currently plays for Werder Bremen, told the Times.

“It’s not easy to go to a huge club like Chelsea and play the same way he did in Dortmund, but I was sure he would be OK. And now you can see some goals and some great games. If he's in full flow, he will be a big player for Chelsea - he already is.

“Which player can be compared to Hazard? There is only a handful of players on the level of Hazard. As I know, Christian doesn’t put himself under pressure to be the next Hazard.

“I spoke to him and he also doesn’t have that pressure from the club, from his manager, so he will be OK. He will be a great player for Chelsea, but he will not be the next Hazard. It’s important to be the best version of Christian Pulisic.”

A 2-0 victory over Crystal Palace on Saturday moved Chelsea up to third place in the Premier League table going into the November international break.