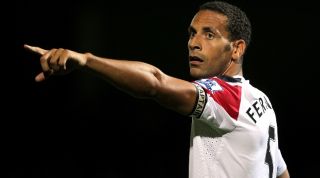 Rio Ferdinand may be one of the finest centre backs ever to play for England, but he admits he never wanted to be a centre back at all.

Now 41, he looks back on the day when he was asked to move into defence. He was horrified. “At the time I didn’t know it, but it was a huge point in my career,” Ferdinand tells FourFourTwo. “I was about 14, and someone said ‘Rio, I don’t want you to play central midfield any more, I want you to play centre-back’.

"Being a centre back wasn’t fashionable. I wanted to be a central midfielder who scored goals and was the star, on the front and the back of the paper all the time. They said ‘Yeah, but I think you’ve got a better chance of being a defender’. I sulked for about two or three weeks. Then I realised ‘Actually, do you know what? This is my best route to being a professional footballer.'"

Ferdinand quickly excelled in his new position, and never looked back. Four years after bringing his playing days to an end, he’s hoping to pass on advice to aspiring players as part of a new app called Train Effective.

“It allows people from anywhere in the world to have access to elite coaching, from ex-professionals like myself, and professional coaches who’ve worked with the elite players. Whether they’re in Africa, in Asia, in London or wherever they may be, they can have access to that great knowledge, experience and very detailed information on how to train like a professional.”

Ferdinand believes the way he was adapted mentally to his change of position - something that could have been seen as a setback - was a key ingredient in his career success. He’ll be passing on advice as part of this new venture.

“It’s going to include stuff about the mentality side of the game,” he explains. “When you talk about becoming a professional player as a young kid, who really talks about the mental side of it, how to approach games, how to deal with moments where things aren’t going your way?

“When children get to a point where they’re told ‘Actually we don’t think you’re good enough at the moment’, or there’s a little bit of negativity that comes into their game from outsiders, a lot of kids fold at that point. They say ‘Do you know what? This ain’t for me, I can’t deal with it’.

“We’re going to give them the experiences that I and other people have gone through, to enable them to deal with it so they can take it on the chin and suck it up. They’ll be able to use certain tools we give them to motivate themselves to go again, apply themselves and be the best that they can be. I was lucky I had people around me who were telling me the right things. Not everyone has that person on their shoulder.”

“But I didn’t have any apps or videos showing me ‘This is the way you train’. I was just going to the park, kicking balls around with my mate and my mate would say ‘Let’s do this’. There was no real detail or professionalism behind what we were doing.

“If you’ve got this app, you can have a look at it, put it down where you’re playing, against your bag, and carry out what you’re being told. There are steps to what you’re doing, and there’s method behind the madness - ‘these are the steps, this coach is telling me to do that and he’s done it with multiple players who are now international footballers, so it must be right’.

“That’s the whole basis behind why I got involved. Nick Humphries is the brainchild of it and he sold me the whole project - he pulled on my heartstrings. This is what I’ve been looking for: to plug back into the next generation and give something back.”

Read more from Rio Ferdinand about his career in football in an upcoming issue of FourFourTwo magazine.

*Ferdinand was speaking at the launch of Train Effective, a new app to help any aspiring footballer improve their physical, technical, mental and tactical training skills. More details at traineffective.com

QUIZ Can you name the 68 managers who’ve taken charge of 100 Premier League games?