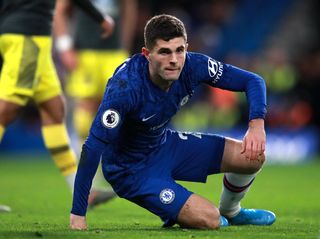 Christian Pulisic has admitted he must sharpen up his finishing after Chelsea threw away a lead at Brighton.

The USA forward tormented the Albion defence but spurned three fine chances as Chelsea were held to a 1-1 draw on the south coast on New Year’s Day.

Cesar Azpilicueta tapped Chelsea into an early lead and Frank Lampard’s men dominated the first hour, only to slip off the pace in the closing stages.

Alireza Jahanbakhsh conjured a stunning overhead kick for the hosts, who could even have claimed the win late on, leaving Pulisic pulling no punches on Chelsea’s room for improvement.

“We said at half time that we had the chance to kill the game and we just weren’t able to,” said Pulisic.

“We couldn’t get the goal and in the end they found an unbelievable goal.

“So now it is about doing a bit more to keep going, attack and create chances and just have that killer instinct. Just a little bit of that, we are missing that.

“I can do better with that as well. Just being more clinical in the final third, finding the right pass or shot and scoring the goals. That’s both mental and technical.

“After we scored the first goal it was just about continuing and just not stopping there, making it two or three and putting the game to bed.

“We’ve had troubles with that this year and then in the end, they fought until the end, scored a great goal and that is how it goes.”

Chelsea are able to strengthen in the January window with their FIFA transfer ban having been lifted on appeal to the Court of Arbitration for Sport (CAS).

The Blues have long admired Leicester left-back Ben Chilwell and have also run the rule over Wilfried Zaha and Jadon Sancho.

New boss Lampard though has insisted that Chelsea will only add players he believes can fit his blueprint for the Stamford Bridge club’s future.

Pulisic arrived from Borussia Dortmund in the summer and insisted Chelsea’s current players would welcome extra competition for places should the club dip into the transfer market this month.

“It is normal that teams look to improve and and if players do come in there is competition, that is how it goes,” said Pulisic.

“So we’ll be ready for that and hopefully we’ll have players that come in and want to help us.”

The 26-year-old ended a 20-match Premier League drought with a goal in the 2-0 win over Bournemouth, and struck again to bag the draw with Chelsea.

Brighton boss Graham Potter hailed the club’s record signing for refusing to let his spirits drop during a tough first year on the south coast.

“All the credit must go to Ali, it’s not just that it hasn’t happened for him under me here,” said Potter.

“If you ask him and the club, he was here for a year last year and didn’t contribute as much as he would like to the team.

“So to carry on and not get to frustrated where you can’t be yourself, that takes a lot of belief. He’s hugely professional and has worked extremely hard.

“Tactically at the start of the season we made it difficult for him to get into the team. But he provides something the other guys haven’t got and I like him a lot.”