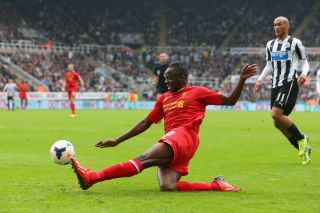 The Frenchman has been employed on the left-hand side in a 3-5-2 formation in the last two games, with Jose Enrique's absence opening up a starting berth for him.

Having suffered an ankle injury in the League Cup tie against Notts County in August, the Valencia loanee returned after a nine-week absence in the 2-2 draw at Newcastle United on October 19.

And he is relishing the responsibility of first-team football in the Premier League, particularly in his new position further up the pitch.

"I can get up the field a lot, whilst remaining safe in terms of the three behind me. We have three defenders in line as a flat back line, which gives me a lot of freedom.

"My natural position is a left-sided defender, so this freedom allows me to give everything I can to the team."

Cissokho's injury blow against League One County hindered his start to life at Anfield but he is glad to be back in the fold.

"I'm very happy to be back playing again after a difficult injury, especially coming as it did at the start of my season," he added.

"I've done everything I can to recover as best and as quickly as I can, and I'm glad to get a couple of matches under my belt thanks to the manager.

"The injury was very painful and it took all my energy to recover from the injury itself first, then to get back to form in terms of cardio and physical work.

"It's getting better a little at a time. I have some more cardio work to do but that's not too tough. It takes a big physical effort, but the manager demands a lot of effort in these areas among the defenders."