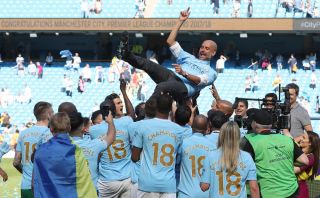 Pep Guardiola has shut down talk that his Manchester City side could win the Carabao Cup final by a landslide.

The Premier League champions and cup holders are overwhelming favourites to beat relegation-threatened Aston Villa at Wembley on Sunday.

City, who are bidding to win the competition for a third successive year, smashed Watford 6-0 in their last major final appearance in last season’s FA Cup and are fancied by some to do the same to Villa.

Guardiola’s side also won 6-1 at Villa Park last month and the midlanders are rated as 22/1 outsiders by some bookmakers this weekend.

But Guardiola insists the aim is simply to win and it would be disrespectful to target a landslide.

The Catalan said: “Before the Watford final, we didn’t expect that. We were incredibly excited at that moment, we had won the toughest league of my life, beating Liverpool by one point.

“I felt at that moment it doesn’t matter who our opponents are, we are going to beat them.

“But in finals, you can never think about the margin you might win by. It would be a lack of respect to our opponent.

“I never thought about the score for any final. Just prepare what you have to do to win the final.”

City go into the game on the back of a stunning victory over Real Madrid in the Champions League on Wednesday but, while that may have put them in good spirits, it could also play into Villa’s hands.

“They’ve had all week to prepare for this game,” said Guardiola. “We had a mentally tough tough game against Madrid.

“I know we are going to suffer for that for the next days because it is normal. It is not just the game (against Madrid), it is the days and weeks before, preparing mentally. There is naturally a drop in adrenaline in your mind and your body.”

Victory would hand Guardiola the 29th trophy of his glittering career.

Given he clearly knows what it takes to deliver, there would seem to be little pressure on him, but he believes his job is actually getting tougher.

Guardiola said: “The first ones are special, of course. At first you don’t know if you are able to do it but now you realise more how difficult it is.

“The beginning was more the excitement, and it is ‘wow, we did it’, but always in the big clubs, the next day you celebrate but the second day, the people knock on the door and say, ‘We have to try to do it again.’

Guardiola is proud of yet another great cup run but admits it does not make up for a disappointing Premier League title defence.

City, champions for the past two seasons, have failed to keep pace with an admittedly outstanding Liverpool side this term.

“People cannot deny we were there and were incredibly committed until the end. And that is what I am proud of most, and that is why we have achieved a lot of finals and won a lot of titles.”