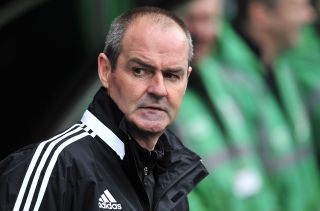 The forwards have struck up a fruitful partnership for Liverpool, scoring ten goals between them in the Premier League this season.

Their combination continued in last Saturday's 2-2 draw away at Newcastle United, with Suarez laying on Sturridge's equaliser 18 minutes from time.

But West Brom are on a five-match unbeaten run in the Premier League, and will take confidence from the fact they have beaten the Merseysiders in their last three top-flight encounters.

And Clarke - a former first-team coach at Liverpool - says his charges will show no fear in Saturday's encounter at Anfield, and will be ready for the challenge posed by Suarez and Sturridge.

"We will go to Anfield with confidence, being five games unbeaten," he said. "We're never daunted by going to the big grounds and we go to these places with the intention of winning the game.

"That's the frame of mind you have to approach these games in. You have to know that you're good enough to go to somewhere like Anfield and compete. If you go with an inferiority complex, you're beaten before you even get there.

"It will be a difficult game. Liverpool are a different team to last season and have started this season well.

"Our games against them last season are good memories but are no reference to what will happen this season.

"Daniel Sturridge and Luis Suarez deserve all the praise they get. Having said that, I don't think Jonas Olsson and Gareth McAuley will be losing any sleep on Friday night worrying about facing them.

"Our players will be looking forward to the challenge of keeping those players quiet."