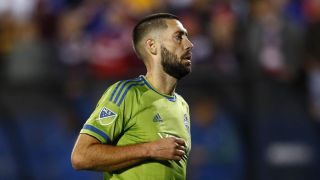 LOS ANGELES — For the first time in more than a decade, Clint Dempsey isn't spending his January in Europe or with the U.S. national team. The 32-year-old American striker has been left out of recent U.S. callups, and more recently the team's January camp. With the memories of Landon Donovan's quick fazing out of the U.S. national team less than two years ago, it is only natural to wonder if Jurgen Klinsmann might be preparing Dempsey for a similar fate.

Dempsey isn't spending much time worrying about that, saying on Tuesday that he has kept in touch with Klinsmann, but isn't taking anything for granted as far as his national team future.

"We've sent texts here and there to each other," Dempsey said of his interaction with Klinsmann. "I'm in preseason with Seattle and we'll see what the future holds. You have to ask him. He's the coach. I show up and play."

When asked by Goal USA if he was concerned about suffering a similar fate to Donovan, Dempsey didn't sound like a player who feels his national team days are numbered.

"I don't worry about it," Dempsey said. "All you can focus on is your play and how you do during the year. If you're not playing well, and you're not fit then you're not going to get an opportunity to get called in. I've enjoyed my time with the national team. I've had a good career. Hopefully it continues.

"It's not my job to make those decisions. It's my job is just to always work hard and make sure to put myself in position so that whatever team calls on me that I can perform for. I feel like I did that last year. I played in 10 games, scored 9 goals. Had a pretty good return for Seattle in 22 games, 12 goals and 10 assists. I feel like, even though I had some injuries, I had good numbers last year."

It remains unclear just when Dempsey will return to the national team fold, but 2016 will present a special opportunity for him. Dempsey has played in three World Cups, but is eager to add a Copa America to his resume after growing up admiring the competition. He isn't taking it for granted that he will be selected for the tournament, but is determined to play well enough to ensure his place on the U.S. team this summer.

"It'd be cool if i get the opportunity. It's a tournament that I enjoyed watching growing up as a kid," Dempsey said. "When people ask me about what club I supported growing up, I didn't really watch a lot of club soccer growing up. The only channels I was able to get in my house had international games so that's what I watched. That's World Cups, Copa America, and I kind of gravitated toward kind of a Latin style, South American style of the game.

"To be able to play in a major tournament like that would be awesome if it's meant to be. All I can do is work hard and make sure I put myself in position to be available for selection."