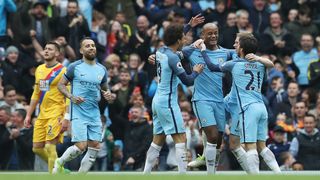 Vincent Kompany deflected praise of his goal in Manchester City's 5-0 demolition of Crystal Palace on Saturday by describing his technique as "close your eyes and swing".

With City leading 1-0 at half-time, Kompany kick-started a second-half goal rush when he hammered an effort into the top-right corner from the centre of the box in the 49th minute.

The scoreline was a fair reflection of the gulf in quality between the two sides on the day, and Kompany says it was important for City to turn their dominance into goals after the break.

"It was only 1-0 at the end of the first half, so it wasn't an easy game," he told Sky Sports. "The good thing is we kept going.

"We forced it, we made it go our way, and we needed that."

After joking about his rudimentary approach to goalscoring, Kompany expressed his delight that his second goal in four Premier League matches opened the floodgates, with City hoping to make the most of a run of three home matches as they look to secure a top-four finish and Champions League football.

"I was pleased with the fact it set off a good second-half performance," added Kompany.

"We wanted to set off this chain of home games right and it couldn't have gone any better, five goals at home.

"We need to repeat the performance in our next two games and that should put us in a good place before Watford [on the last day of the season]."

Discussing the difference in City's performance in the first and second half, Kevin De Bruyne - another of City's goalscorers, along with David Silva, Raheem Sterling and Nicolas Otamendi - commented: "We scored our chances in the second half.

"We created a lot of chances and in the first half we didn't take them.

"In the second half we scored our chances at the right time."

The result lifts City above Liverpool into third on goal difference, with Jurgen Klopp's men hosting Southampton on Sunday, while Manchester United are four points back in fifth ahead of their trip to Arsenal.