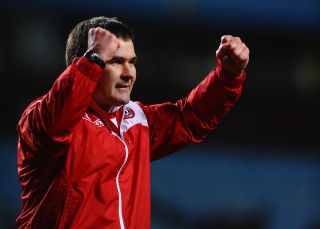 Jamie Murphy put the visitors in front in the 20th minute on Saturday, before substitute Nicklas Helenius looked to have forced a replay with his first Villa goal 15 minutes from time.

However, just six minutes later, Ryan Flynn earned the League One outfit a famous win and a place in the fourth round for the fifth time in the last six seasons.

And Clough was effusive in his praise of his side, who are struggling in 18th position in their league, just one point above the relegation zone.

"You can fluke a result in a cup but I thought we deserved that win. We played some magnificent stuff at the start of the second half.

"We like to be positive and the lads like to enjoy it, as they did, while working incredibly hard.

"We have had a rough six months. This puts a smile on people's faces."