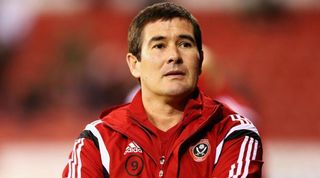 Nigel Clough has been sacked by Sheffield United after failing to secure promotion to the Championship.

Clough guided the south Yorkshire club to the semi-finals of the League Cup this season after reaching the last four of the FA Cup last year.

The 49-year-old, who took over in October 2013 after being shown the door by Derby County, was unable to lift United back into the second tier, though, as they lost to Swindon in the semi-finals of the League One play-offs earlier this month.

Clough has paid the price for that failure, with the club confirming his exit on Monday.

A statement on the club's official website said: "Sheffield United today announce that Nigel Clough, the club's first team manager, and his management staff, are to leave Bramall Lane with immediate effect following the decision by the board that a change in direction was necessary for the forthcoming season.

"The search for the club's new first team manager will now start and it is hoped that this will result in identifying and recruiting the right candidate within a relatively short period of time.

"The club would like to place on record its thanks to Nigel, as well as his backroom staff of Gary Crosby, Andy Garner, Martin Taylor, Simon Clough, Michael Forsyth and Matt Brown for their contribution to the club during their time at Bramall Lane and wish them all well for their future."