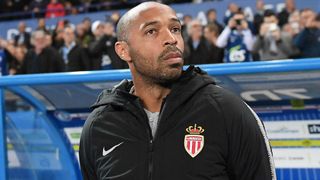 Thierry Henry picked up a point in his first Champions League game in charge of Monaco with a 1-1 draw at Club Brugge – but was grateful to Lois Openda for missing a late sitter for the hosts in the Group A clash.

Moussa Sylla scuffed in with his right foot to put the Ligue 1 strugglers ahead in the 31st minute on Wednesday, only for Wesley's header to level matters as Brugge ended an eight-match losing streak in the competition.

Henry's managerial debut with Monaco on Saturday had been eventful to say the least, as he witnessed goalkeeper Seydou Sy make a shocking error and Samuel Grandsir receive a red card in a 2-1 loss at Strasbourg.

Radamel Falcao sustained an injury at the weekend, leaving the new man in charge without one of his more seasoned European campaigners.

He also lost Stevan Jovetic after less than 10 minutes due to a right leg injury, yet the visitors overcame his early exit to take the lead just after the half-hour mark, Aleksandr Golovin allowed to carry the ball forwards before slipping a pass through to Sylla, who saw his first-time attempt roll in despite making poor contact.

And with that, the referee brings this game to a close. Moussa Sylla was our goalscorer as we picked up our first point in Group A.October 24, 2018

Crucially, though, the forward failed to double both his and Monaco’s tally when he missed the target with his left foot from a tight angle after rounding goalkeeper Karlo Letica – and the let-off allowed the hosts to level prior to the break.

Hans Vanaken’s right-footed cross from the left flank was met firmly by Wesley, the Brazilian forward steering his header beyond Loic Badiashile – making his first start of the season – in Monaco's goal.

The 20-year-old keeper was able to deny Emmanuel Bonaventure in the early stages of a second half that saw Brugge in the ascendency.

Their dominance would have been rewarded with a late winner had substitute Openda hit the target with a free header from inside the six-yard box in additional time, the shocking miss letting Henry and Monaco off the hook at the death.

What does it mean? Monaco fight hard for new boss Henry

Henry had spoken on the eve of the game about how he hoped the Champions League fixture could provide an opportunity to build confidence in a squad who have not registered a victory in any competition since the opening day of the Ligue 1 season, back on August 11.

The former France international - making a quick return to Belgian soil following his time working for their national team as part of Roberto Martinez's staff - will be pleased to have escaped with a draw in the end and, with the reverse fixture to come on November 6 - they still hold the upper hand in what appears to be a battle to finish behind Atletico Madrid and Borussia Dortmund in the group.

Having twice seen goals chalked off by the referee's assistant for offside - correctly on both occasions, too - it was third time lucky for Wesley when he converted Vanaken’s teasing delivery from out wide. The striker was a problem throughout with his strength and speed.


Sylla goes from hero to zero

Perhaps fortunate to score with his right foot, Sylla's failure to convert with his left when presented with an open net proved crucial. Had he shown a little more composure to roll his attempt in - rather than across the face of the goal and beyond the far post - Monaco would have had a comfortable cushion. Instead, their slim lead evaporated inside eight minutes.

Henry will get to experience his first home game in the job when Monaco host Dijon on Saturday, while Club Brugge revert back to domestic duties with a trip to Sint-Truiden as they look to keep pace with leaders Genk.