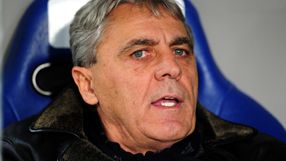 Football's governing body UEFA added that they were opening a disciplinary case against the club for what they described as the coach's "improper conduct."

"Due to this unwanted gesture committed by Sorin Cartu we have decided to sack him from his current position," CFR Cluj president Iuliu Muresan said in a statement on the club's website.

"We would like to give our most sincere apologies, first of all to UEFA, the host of the Champions League competition, to the Swiss club FC Basel, to our fans and to all football and sports fans."

Cartu, 55, repeatedly kicked the side of the shelter with his feet, smashing through the perspex glass.

Cluj are bottom of Group E with three points from five matches and cannot qualify for the knockout stage.

Cartu was appointed to replace Andrea Mandorlini in September after an indifferent start to the season, even though the Italian had led them to the double last season.

After winning their opening match in Group E, Cluj have lost their last four. They host AS Roma in their final group game on December 8.