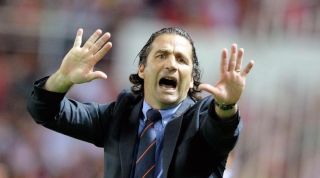 Sevilla will visit the Mestalla on Thursday holding a 2-0 aggregate lead from last week's first leg at the Estadio Ramon Sanchez Pizjuan.

Pizzi's side produced a stunning turnaround against Basel in the previous stage to reach the final four, emerging 5-3 victors after a 3-0 first-leg defeat in Switzerland.

Though the 45-year-old is not expecting lightning to strike twice, he has issued a call to arms to the supporters to create an atmosphere that can inspire his players.

He said: "There are not many chances to play in the semi-finals of a tournament and do what we are doing.

"But it is also true that we have to recover from two goals down against a really good team and it is going to be very difficult to overcome them.

"But people have to come here to enjoy the match with optimism. I would like to see the stadium full, with the people enjoying their time at the Mestalla and hopefully to see their team reach the final. So these are our expectations.

"It's going to be difficult because we face a very good team, who knows us much better than Basel, and who are used to playing in La Liga with the pressure, so it is going to be very difficult."

Meanwhile, midfielder Seydou Keita, who counts Sevilla among his former clubs, will not allow Valencia's desperation for goals translate into a haphazard performance, and has not ruled out completing a stunning comeback.

"We are a team, with 11 players on the pitch and those on the bench but I'm like any other player and will always try to do my best."