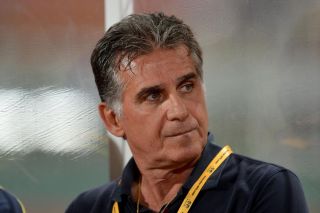 The Portuguese extended his contract with the Asian nation in June, with that deal lasting until the end of the marquee tournament.

Queiroz revealed that the Iranian Football Association had offered him the chance to stay, but the former Porgutal coach believes financial restrictions mean that he cannot take Iran any further.

"I will end my relationship (with Iran) after the World Cup," he told Portuguese publication Publico.

"There was a moment when Iran proposed me to stay, and they still do show they want me here.

"But there is not enough support from the government, and it's clear this interest, in fact, is over, due to financial conditions, to keep doing the job we have been developing at the national squads.

"The dialogue is over, and I already decided that I am not going to stay."

Queiroz witnessed Iran draw 0-0 with Nigeria in their Group F opener, and now must prepare his side for a showdown with Argentina, who are considered one of the favourites for the tournament.

The 61-year-old admits Iran face a near impossible task against a team he considers among the best in the world, but believes his side be fully prepared.

"Argentina carry a top world football reputation," he commented. "It's difficult to find another national team with so much credibility and reputation. They are among the top five teams in the world.

"You could only be ready for Argentina if you had 20 years of football preparation. Now the objective is to have our players mentally and physically fresh to play this game."