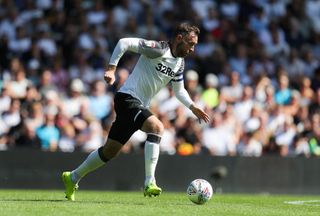 Derby manager Phillip Cocu has confirmed an investigation has been launched into an alleged incident in the aftermath of Tuesday night’s Carabao Cup defeat at Nottingham Forest.

An altercation involving skipper Richard Keogh reportedly took place while substitutes were warming down and members of the Forest ground staff were tending to the pitch following the Rams’ 3-0 loss.

Pictures have been published of Keogh with blood on his neck, and Cocu – when previewing Saturday’s Sky Bet Championship match at Brentford – confirmed an investigation has been launched by both clubs.

Cocu says that both Derby County and Nottingham Forest are investigating an incident that took place after full-time at the City Ground on Tuesday, so he can’t say too much. #BFCvDCFC— Derby County (@dcfcofficial) August 29, 2019

“It’s always negative if an incident happens on the pitch, especially after the game,” Cocu told reporters.

“At the moment both clubs are investigating what happened, so I can’t say too much.

“I have spoken to Richard, as well as other members of the club, and it is still ongoing. There will be an announcement if something happens.”