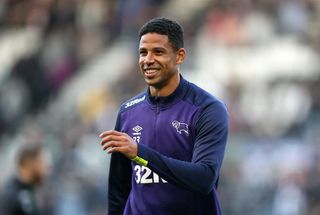 The game at Pride Park appeared set to end goalless until midfielder Graeme Shinnie rifled home an unstoppable shot in the second minute of injury time for his first goal for the Rams since his free transfer from Aberdeen in the summer.

The catalyst for Cocu, though, was defender Davies, who suffered a broken nose after accidentally being kicked in the face by Kieffer Moore eight minutes from half-time but saw out the game.

“When you play on with a broken nose, that says something to the team,” said Cocu.

“I am convinced he was in a lot of pain, and because of that you have to be really strong mentally. I am really happy with him.

The late strike left Wigan boss Paul Cook bemoaning the cruelty of football, claiming his side were caught by “a sucker punch” at the end of what he felt was their best away performance “for a long time”.

A dejected Cook, whose side have won just twice on the road in 30 league games since they were promoted from League One 17 months ago, said: “Our away form is there for all to see. It hasn’t been good enough.

“But tonight, can we do any more to get something out of the game? I’m not so sure we can. Football can be such a cruel game at times, and that was very evident tonight.”

Wigan had the chances in the second half to claim a rare away win, only to spurn them and leave themselves open to Shinnie’s stunner.

“Derby didn’t look like they were a threat in the second half, whereas we continually created chances,” added Cook.

“Those moments in the game are huge. Against a team the calibre of Derby, they are always liable to hurt you, and that was never more evident than with their late goal.

“Moments come in games you must take if you are going to be successful, and we had enough moments tonight to make sure we won the game, but we never took them.

“When you’re like that at 0-0 you are always liable for that sucker punch, and we got it.”

A hoarse Cook is confident that elusive away win will come as his side has taken just one point from seven games on the road this season.

“We haven’t played as well as that away from home for a long time,” assessed Cook.

“When you get on buses to go home and you can’t ask any more of your players, you will always be okay.”