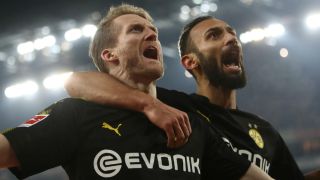 Andre Schurrle's late strike secured Borussia Dortmund a dramatic 3-2 win at Cologne on Friday, with the Germany international bailing out two Roman Burki errors to cap off a two-goal debut from Michy Batshuayi.

Cologne had seemingly rescued a point after twice battling back from a goal down, but Schurrle struck six minutes from time to finally end their resistance after Batshuayi proved something of a point to parent club Chelsea with a brace on an impressive first Bundesliga start.

Batshuayi had been billed as Pierre-Emerick Aubameyang's replacement after his move to Arsenal and wasted no time in endearing himself to Dortmund fans, showing good awareness to wait for a cut-back before firing a strong left-footed effort into the net with 35 minutes played.

He was guilty of a poor miss early in the second half, however, wasting the opportunity to put Dortmund in complete control and Simon Zoller capitalised on a Burki mistake to punish them with an equaliser after an hour.

Batshuayi swiftly made amends, producing a neat finish to double his tally and seemingly put Dortmund in control, yet Cologne fought back for a second time through Spanish defender Jorge Mere – Burki arguably at fault again.

But Dortmund managed to avoid succumbing to a fourth successive draw, as Schurrle scored his first Bundesliga goal since March in style towards the end, giving coach Peter Stoger reason to celebrate upon a first return to his former club.