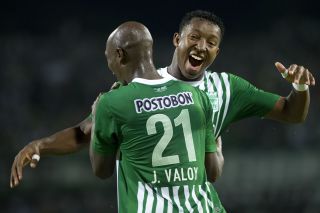 With the match goalless at half-time, Nacional took control of the game in the second half when Jhon Valoy scored in the 56th minute.

It took until the 81st minute to make it two as Oscar Murillo found the net and the flurry of goals came soon after with Elkin Calle and Sherman Cardenas both scoring in the final six minutes.

Cucuta Deportivo went bottom of the league after they were narrowly beaten 2-1 by Deportivo Cali.

Sergio Romero gave Cali the lead after 48 minutes but Cucuta's Javier Araujo tied the contest in the 61st minute.

Cali went ahead again on 76 minutes when midfielder Carlos Lizarazo scored and Cucuta could not force their way back into the game.

Two goals in the second half handed Santa Fe a 2-1 away win against Deportes Quindio.

Strikes through Jefferson Cuero on 53 minutes and Yovanny Arrechea in the 78th minute were enough to see off Quindio.

A late goal to Didier Moreno was not enough as Atletico Huila went down 2-1 at Patriotas Boyaca.

Boyaca made all the early running as Danilo Moreno and Jose Tancredi grafted a 2-0 lead with goals within four first-half minutes.

The sending off Boyaca's Gonzalo Martinez on 79 minutes swung the contest but Hulia could only pull one goal back through Moreno's late strike.

In other results, Alianza Petrolera got a 1-0 result at Medellin, Deportivo Pasto overcame Junior 1-0 and Dayro Moreno netted a hat-trick to power Millonarios to 3-0 win against Once Caldas.

Deportes Tolima drew 1-1 with Boyaca Chico while La Equidad and Envigado shared the points in their 1-1 draw.