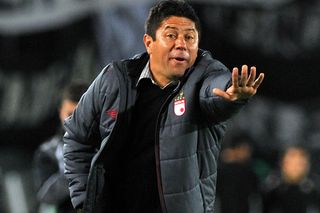 Reigning champions Atletico Nacional moved within a point of Wilson Gutierrez's Santa Fe with a 2-0 win over Deportes Tolima on Sunday, taking advantage of the Colombian league leaders' draw on Saturday.

Santa Fe kept their fourth clean sheet of the Apertura campaign but were unable to break down Cali's defence with the visitors claiming just their second point of the season.

The result left Santa Fe on 13 points from five matches with a plus seven goal difference, while Nacional (12 points, plus nine) and Boyaca Chico (12, plus four) sit second and third respectively.

The reigning champions beat Tolima thanks to goals from Diego Peralta and Fernando Uribe, while the losers finished the match with 10 players after Felipe Noguera was shown a red card just after the hour-mark.

Boyaca Chico defeated Envigado 2-0 thanks to a first-half brace from Armando Carrillo.

Once Caldas and Junior both moved up to 11 points after they recorded wins on Sunday.

Junior edged out Patriotas Boyaca 1-0 and Once Caldas held off Alianza Petrolera to win 2-1.

Atletico Huila drew 1-1 with Medellin, Itagui won 2-1 over Fortaleza, Deportivo Pasto were held to a 1-1 draw by Millonarios and La Equidad and Uniautonoma played out a scoreless draw.