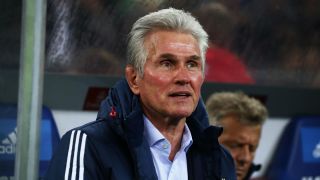 Hummels and Coman were involved in Bayern's 1-0 win at Hamburg on Saturday, but had since been considered doubts for the trip to Leipzig.

Coman received a bang to his knee during the match, while Hummels suffered an ankle problem, though a positive update was offered by Heynckes, who said on Tuesday they could both feature.

Spain international Martinez is also going to travel after being out for 10 days with a shoulder problem, leaving Heynckes relieved to receive some good news on the injury front following Thomas Muller's hamstring strain which is likely to keep him out for three weeks.

Heynckes expects both & to be available. will also travel to Leipzig. October 24, 2017

"Mats Hummels has a knock on the ankle," said Heynckes.

"But it does not matter much. Mats can grit his teeth and can play from the start.

"Martinez goes with us too, but I don't know yet if I will take the risk [of playing him].

"Coman has a bruised knee. He is being treated, but he can play. Kingsley is a young player who is especially liked by me.

"He is not mature yet. He has to gain self-confidence and assuredness, get integrated into the team and the matches, but I always enjoyed him as a player."

Heynckes accepted that losing Muller was a significant blow, but he is content that he has sufficient options in midfield to be able to shift things around in his absence.

"Of course, Muller is a big loss," he said. "But such injuries are always happening and you have to try to compensate for these blows, but I think he'll be back in three weeks.

"There is James [Rodriguez], there is Thiago [Alcantara] [who can come in] – we have to make sure that there is a balance in the middle of the field.

"[Corentin] Tolisso can go forward, too, and Arturo Vidal could be a player who can be a defensive option, as I've yet to see if Martinez can play."