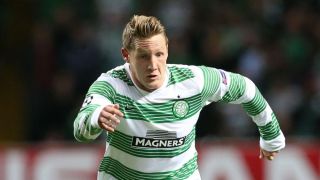 Kris Commons and Craig Gordon have hit back at Ronny Deila for suggesting Celtic's players were "scared" as they were knocked out of the UEFA Champions League by Malmo.

Despite a 3-2 victory in the play-off first leg, Celtic were unable to turn it into an aggregate victory in Sweden on Tuesday as they were beaten 2-0.

After their 4-3 aggregate defeat Deila was critical of his players for a "very poor performance" and accused his squad of being "scared", however experienced duo Commons and Gordon have rejected the criticism.

"I wouldn't say we were scared," said Commons. "There are too many big characters in there [the dressing room] to be scared. We have played in the Champions League, Europa League and big international games.

"This was a big game, but we were not scared."

Goalkeeper Gordon echoed his team-mate, adding: "I wasn't scared. It was a good game to be involved in, but we weren't good enough tonight."