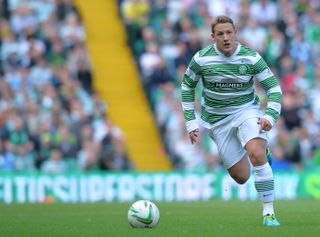 Neil Lennon's side have won 18 and drawn three of their 21 league matches this season, putting them more than halfway towards completing a full campaign without defeat.

Goalkeeper Fraser Forster is also closing on a Celtic record, having kept eight successive clean sheets to move two games away from equalling the mark set by Charlie Shaw in the 1920s.

Buoyed by a run of 10 straight victories in Scotland's top flight, Commons is keen for Celtic's imperious form to continue.

He told Celtic View: "I think it's one of the main motivations just now in the game. We're going for as many records as we can - the unbeaten run, the clean sheets, everything we can get at the moment.

"Teams are coming knowing if they just score one goal they can bring all that to an end for us so it's big for us to keep it going."

Celtic's next league game will see them face Hibernian at Easter Road on Sunday.