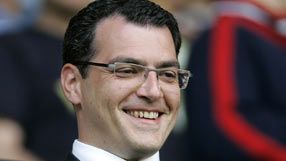 He becomes the first major backroom appointment at Anfield since new American owners, New England Sports Ventures (NESV), completed their takeover of the club in October.

Comolli, who has worked as a scout for Arsenal and director of football at Tottenham Hotspur, has been handed a broad remit covering scouting, recruitment and player development.

"Damien has a proven track-record of identifying exciting young footballing talent and we are delighted that he has agreed to join Liverpool," NESV principal owner John Henry said on the club website.

Liverpool have endured a miserable start to the campaign and are currently languishing in 13th place in the Premier League.

"I am looking forward to working with Damien whom I have known for many years," Hodgson said. "We are engaged in an exciting project here and he will bring a lot to the table.

"We all want to see moves to strengthen the squad and support player development over the next few years. John Henry and I are totally united in delivering on that ambition."

He joined Tottenham in 2005 where he worked under managers Martin Jol and Juande Ramos before being dismissed when Ramos's tenure came to an end in October 2008.

"I am delighted to be joining Liverpool and look forward to working with John and Roy," said Comolli.

"I think we all realise there is a big job ahead, but we all share the vision that John has for rebuilding the club and bringing back the success that the supporters deserve."