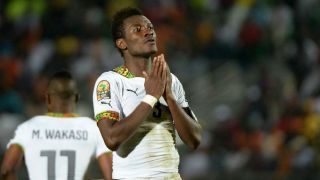 Ghana striker Asamoah Gyan is keen to prove his worth on the international scene, as he returns in time to help his country face Comoros in the second round of CAF qualifying for the 2018 World Cup.

The experienced attacker missed his country's friendly draw with Canada last month as well as their AFCON qualification win over Rwanda due to injury, but is raring to go again as Comoros await.

"I am OK now and if anyone wants to judge me he should judge me when I am on the pitch and fully fit," the former Sunderland told Asempa FM

"I have had some injury issues in the past but I am ready to go now."

Additionally, Eintracht Braunschweig right back Phil Ofosu-Ayeh has received a call up after an impressive debut in the friendly against Canada, while former Ghana Under-20 star Ebenezer Assifuah has also been named in the squad.

Comoros, meanwhile, are relying on the usual suspects to do the business against Ghana, with Amerdine Abdou not calling up any new faces, although a number of players return to the squad after missing out on the win over Lesotho.

"There are no new players in the squad, but Chaker Alhadhur, Kassim Abdallah, Fouad Bachirou, Nasser Chamed and Mohamed Youssouf return," he explained at a press conference.

Comoros, who sit 187th in the FIFA World Ranking, have not qualified for a major tournament as of yet since declaring independence in 1975, but their surprise win over Lesotho will have been a huge boost.

After a scoreless draw at the Stade de Moroni in the first leg, Mohamed M'Changama's 71st-minute equaliser in the return eventually made the difference and Comoros will be hoping for more of the same from the Marseille-born forward on Friday.