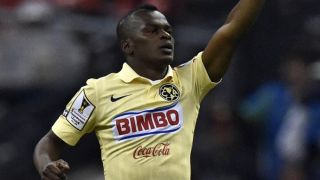 America stayed perfect in the CONCACAF Champions League as the Vancouver Whitecaps claimed an important win.

Carlos Quintero scored a brace for Liga MX giants America as they recorded a 3-1 victory against Walter Ferreti.

With the win, America (nine points) stayed top of Group E - ahead of Motagua (three) and Walter Ferreti (0).

Quintero opened the scoring in style in Managua, getting on the end of a Rubens Sambueza pass before volleying into the top corner.

Michael Arroyo put away a penalty in the 27th minute to make it 2-0, before the hosts pulled a goal back through Jose Laureiro.

Quintero struck again before the break, receiving another Sambueza pass before drilling a finish into the bottom corner.

Vancouver Whitecaps, who lead the Western Conference in MLS, edged to a much-needed 1-0 win over Olimpia.

Kianz Froese scrambled in the game's only goal in the 42nd minute after a fine team move.

The Whitecaps sit second in Group F despite the win, level on four points with Seattle Sounders - and one ahead of Olimpia.

W Connection needed an 82nd-minute goal from Alvin Jones to overcome Deportivo Saprissa 2-1 for their first points in Group A.