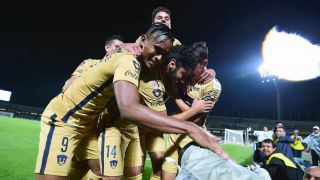 Pumas UNAM have made the perfect start in Group A of the CONCACAF Champions League, claiming their second win in two matches, defeating Honduras Progreso 2-0 in Mexico City.

After their opening 4-2 win over W Connection, the youthful Pumas marked their first home match in the Champions League since 2011-12 with an assured victory, after second-half goals from Eduardo Herrera and Saul Berjon.

Woodrow West was looking tough to beat in the Progreso goal, before Francisco Palencia's side hit the lead in 65th minute through Herrera, with a spectacular overhead.

Pumas added another in injury time, with new signing Berjon settling the result.

In Group B, Deportivo Saprissa opened their Champions League season with a 6-0 thrashing of 10-man Dragon.

After falling out in the group stage last season, the Costa Rican Invierno champions started off on a positive note, never looking troubled after Rolando Blackburn's fourth-minute goal.