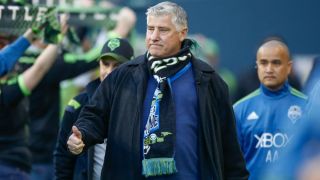 The Sounders registered their first win in Group F courtesy of a late 3-2 win over Olimpia last week.

Stars Obafemi Martins and Clint Dempsey were absent from that match and Sigi Schmid named the same starting XI for the reverse fixture at Estadio Tiburcio Carias Andino, but Seattle were unable to repeat the feat as Alberto Elis sank the MLS visitors with his strike on the hour-mark.

Elis, who scored on the road last week, spun around his defender before finding the back of the net via a deflection.

Despite the loss, the Sounders remain top of the standings on four points after three matches.

Olimpia are a point further back in second, though they have a played a game less, while Vancouver Whitecaps have two matches in hand.

Queretaro seemed certain to claim their second win in Group C after Sinha broke the deadlock in the 77th minute.

But Richard Rodriguez's 89th-miute equaliser and Mario Osuna's own goal a minute later lifted San Francisco to their first win of the campaign.

Meanwhile, Copa Libertadores runners-up Tigres UANL played out a 1-1 draw with Herediano in Group B.