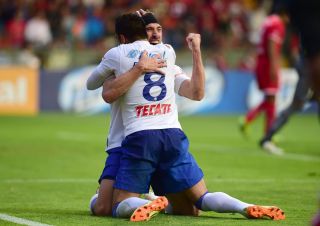 The Liga MX outfit drew 1-1 with Liga MX counterparts Toluca away from home, with Luis Tena's visitors clinching the trophy on away goals after the first leg ended scoreless.

Cruz Azul entered the final level with fellow Mexican side America on five tournament wins, but broke through for their first continental success in 17 years with the narrow victory.

Mariano Pavone scored the all important goal for Azul, tucking away Marco Fabian's cross at the far post - with the Argentine in plenty of space to score into an empty net after Toluca goalkeeper Alfredo Talavera was caught out of position.

The goal meant Toluca needed to score twice to have any hope of lifting the trophy, although they got back into the final when Edgar Benitez equalised on 63 minutes.

Wilson Mathias laid a ball out wide left to Benitez, who took a touch before curling a left-footed effort into the roof of the net from an acute angle - much to the glee of the home faithful.

Benitez had only come onto the field nine minutes earlier as a replacement for Carlos Esquivel, and he would be in the action again inside the final 20 minutes for all the wrong reasons.

After once again looking dangerous on the left, the Paraguayan tried to con the referee that he was fouled inside the area when replays showed no contact was made.

The referee waved away the penalty appeals from both player and the home fans, but also failed to caution Benitez for his clear simulation.

And Toluca would not find the winner they needed, with Cruz Azul coming closest to sealing the result late on when they hit the woodwork.

It mattered little, though, as Tena's men celebrated a famous title win over their rivals.