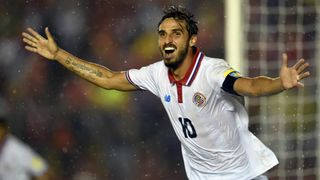 Costa Rica continued their perfect start to World Cup qualifying after seeing off Panama 2-1 on Tuesday.

Quick-fire goals from Bryan Ruiz and Marco Urena midway through the second half helped the Costa Ricans make it two wins from as many matches.

Luis Tejada pulled a goal back for Panama with 19 minutes remaining at Estadio Rommel Fernandez Gutierrez but Costa Rica held on to move clear in Group B, three points ahead of the former.

Jamaica were also victorious as they claimed their first win in qualifying via a 1-0 triumph in Haiti.

The Jamaicans lost to Panama last time out but bounced back thanks to English-born Birmingham City striker Clayton Donaldson, who netted the match-winning goal just past the hour-mark.

Guatemala, meanwhile, crushed St Vincent and the Grenadines 4-0 away from home for their first points in Group C.

The United States were held to a goalless draw in Trinidad and Tobago.

In other results, Mexico beat Honduras 2-0, while El Salvador and Canada drew 0-0.