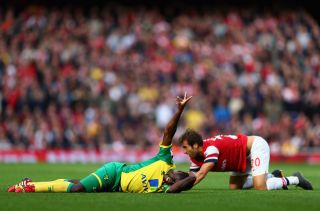 The French midfielder was substituted after 37 minutes of Saturday's 4-1 Premier League victory over Norwich City following a clash of heads with Alexander Tettey.

And, despite the 29-year-old training on Monday, manager Arsene Wenger has revealed that he will not feature for the visit of Jurgen Klopp's men.

"Flamini is doing well," he said. "He's practiced normally, but we won't play him tomorrow.

"There is a five-day rule (with concussion) that we will respect."

Wenger also claimed that the clash with last season's runners-up would not be the deciding factor in who wins Group F.

And on the subject of his own German contingent, which includes record-signing Mesut Ozil, the French manager said: "Germans have a reputation for being 100 per cent professional and we have not been disappointed."

The loss of Flamini will come as an added blow to Arsenal, with Theo Walcott having been ruled out for a further three matches following a setback in his recovery from abdominal surgery.