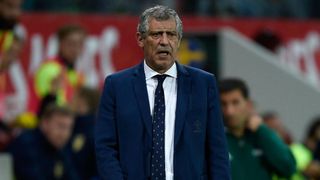 Portugal coach Fernando Santos claims that the Confederations Cup "does not matter at all" as he instead focuses on World Cup qualification.

Victory at Euro 2016 secured a berth at the Confederations Cup, which starts later this month and will see Santos' side in a group with Mexico, New Zealand and hosts Russia.

But, before the tournament kicks off, Portugal have a friendly against Cyprus and a key qualifier against Latvia, with the European champions three points behind Switzerland at the top of UEFA's Group B.

And Santos is prioritising the Latvia game as he hopes to have winger Ricardo Quaresma fit and firing.

"It will not do me any harm, but, at the moment, Confederations Cup matters zero," he told a news conference. "I am interested in preparing very well for the game with Latvia.

"The Confederations Cup does not matter at all. I want to know if Quaresma is good for Latvia - we thought he was only going to be there next week, but he had a problem and asked to comply with the recovery plan here.

"I think he will be more involved in training next week."