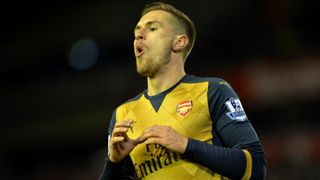 Arsenal midfielder Aaron Ramsey says he is feeling full of confidence after his goalscoring form continued in the 3-3 draw at Liverpool on Wednesday.

The Wales international scored the Gunners' first of the match by converting Joel Campbell's slick pass and also had a dinked effort headed off the goal-line by home defender Mamadou Sakho.

Ramsey, who has proven his goalscoring credentials before by netting 16 times in all competitions for Arsenal during the 2013-14 season, has now scored four times in the last nine matches he has been involved in and is hoping to add more.

"I am feeling confident," he said to Arsenal Player. "It was a good ball from Joel again, so I was delighted with that goal.

"I know my team-mates have the ability to pick my runs out and give that final ball for me [so I] can get on to it."

The dramatic Anfield draw, which saw Joe Allen net a last-minute equaliser for Liverpool, means leaders Arsenal have only won one of their last five Premier League away games.

Title rivals Leicester City now only trail them on goal difference, with a difficult match away at Stoke City up next on Sunday – a fixture the Gunners have failed to win in their last five attempts.

He added: "We are gutted to concede in the last minute but these things happen.

"We did well to get back to level terms and then take the lead but it is just disappointing to concede right at the end. It is not an easy place to come but we will take the positives from it and move on.

"We have a tough game coming up against Stoke - we have not found it easy the last few times we have been there but we will be looking to get back to winning ways and get back on another run."