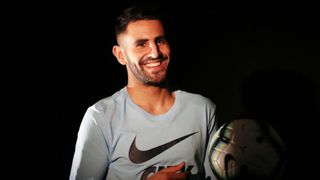 Riyad Mahrez has no doubts over his ability to see off fierce competition and earn a place in Manchester City's star-studded starting XI.

The Algeria international ended a long-running transfer saga when he completed a reported club-record £60million move from Leicester City on Tuesday.

Though he was close to joining the Premier League champions in January, questions have been raised over how the winger fits into a team already flush with attacking talent.

Mahrez, however, believes he is capable of breaking into Pep Guardiola's plans.

"I never thought about it," he told reporters on Thursday.

"After what they've done, of course it is amazing work. They broke all the Premier League records which is unbelievable, but no I never thought about this.

"I'm very confident about myself and I hope to improve this team."

MAHREZ: It’s a club who wants to win the UCL. City are a big club and have everything to try to win it. It’s a goal. Now we will have to work and see what can happen.July 12, 2018

Mahrez's impressive four-and-a-half years at Leicester, which included a stunning league title in 2015-16, made him hot property both in England and abroad.

The 27-year-old revealed the pull of Guardiola ensured City was always his preferred destination.

"Pep is a big manager who has won a lot of things and made history at this club," he said.

"I wanted to work under him and to play in this club. I didn't hesitate at all. He wanted me."