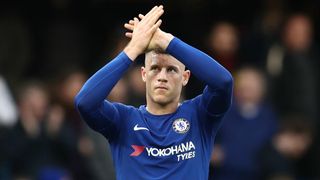 Ross Barkley has been backed to go to the World Cup as part of the England squad by Chelsea manager Antonio Conte.

Barkley was part of the Three Lions squad for Euro 2016 but did not feature at the tournament and has not appeared for his country since.

After missing the first half of the season through injury, Barkley completed a move from Everton to Stamford Bridge earlier this month, for a fee believed to be in the region of £15million.

And Conte believes Chelsea's new signing has a chance to force his way into Gareth Southgate's plans for Russia 2018.

"There is time," Conte told reporters ahead of Wednesday's Premier League game against Bournemouth.

"But at the same time in every game when you decide to play for a great team you are in contention with other players and you have to try to exploit every chance that you have to play and to show that you deserve to play.

"I think the time is right to find a place in the World Cup but for sure it won't be easy in the English squad, the squad is very strong."

Barkley made his debut off the bench against Arsenal in last week's EFL Cup semi-final defeat, while he was also used as a substitute in the FA Cup win against Newcastle United on Sunday.

And Conte indicated the 24-year-old is in line to make his Premier League debut for Chelsea against the Cherries at Stamford Bridge, although he needs to adapt to the team's style.

"My worry is not about his physical condition but only to go into our idea of football," Conte said.