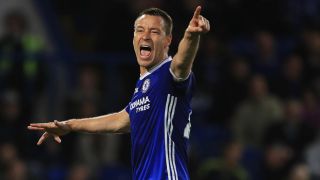 Chelsea boss Antonio Conte believes departing captain John Terry has the characteristics to be a good manager in the future.

Terry will leave Chelsea when his contract expires at the end of the season after 19 stellar years in the first team.

The 36-year-old former England international has won 17 trophies during his time at Stamford Bridge, however he has found games hard to come by as Chelsea clinched the Premier League trophy this term – making only five starts.

Conte, though, has backed Terry to make the move into management once his playing career ends.

"He can be a good manager," Conte said ahead of Sunday's visit of relegated Sunderland.

"He has the right personality, and has great experience after working with many managers, and he has won a lot.

"It's important to start your career [in management] with this at your back. He has had so much experience with fantastic managers and will be able to mix the knowledge gained over many years working under different coaches.

"But it's also important to have your own ideas when you start to become a manager or coach. You have to understand what is the best way for you when you finish playing football. But, if you ask me if he has the characteristics to be a good manager in the future then, yes, he has."