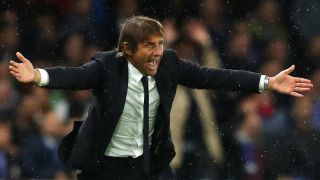 Antonio Conte has labelled the five changes he made to the Chelsea team for their Champions League win over Qarabag as a sign of the trust he has in his players.

The Blues cruised through their first European game of the campaign, winning 6-0 with Davide Zappacosta and Tiemoue Bakayoko both scoring for the club for the first time.

Chelsea boss Conte had brought Zappacosta into the side, along with Andreas Christensen, Gary Cahill, Willian and Michy Batshuayi, but insists his changes did not weaken the Premier League champions.

"I hear this [about the depth of the squad] now after a good win but, before, you criticise me after a lot of changes," he told BT Sport with a smile.

"I think in that situation it is very important to give the chances, to give the opportunities to players like Christensen. Christensen is a young player from the academy.

"They must understand that I trust my players. I have 17 senior players and every single player can have the chance to play."

A great start to our UCL campaign & a breath of fresh air for me incredible atmosphere tonight thx all for your encouragements September 12, 2017

And Conte identified a number of individually pleasing aspects within a dominant performance.

"[There were] a lot of positive things for us," he added.

"Batshuayi to score, Zappacosta's first appearance here at Stamford Bridge - he played very well - and [Eden] Hazard is trying to find his best form. We are happy to see him on the field."

Qarabag coach Gurban Gurbanov focused on the positives for his side and football in Azerbaijan despite a difficult debut in the competition.

"This is a first for Azerbaijan - we're a new country in football, but I'm happy that this accomplishment is associated with me," he said. "I'm not happy with the result, but we must learn from our mistakes.

"Being in the Champions League is a big success for us and it will lead further to popularisation of football in Azerbaijan.

"I'm very proud to lead this team. I believe we'll have more success in future."