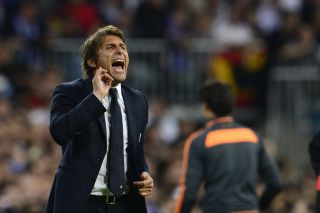 Arturo Vidal gave Juventus a first-half lead from the spot and Carlos Tevez struck just before the break in a dominant performance.

The result provided a much-needed boost for Conte, whose future has been the subject of discussion in recent weeks.

Conte told Sky Sport Italia after the game: "The performance was good, like in Madrid and Florence for 70 minutes.

"I was pleased with the attitude. We dominated the game and we could have had a lot more goals."

One bright spot for Conte was the performance of Fernando Llorente, who has shown improvement since enduring an indifferent start to his career in Turin.

The Juve boss believes there is still more to come from the former Athletic Bilbao striker.

"Llorente is growing; we have been patient because we knew of his qualities. But I expect it to grow even more," said Conte.