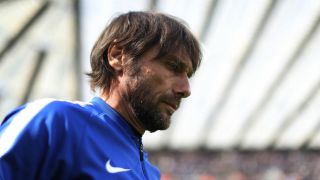 Antonio Conte presided over Chelsea's return for pre-season training on Monday, despite persistent speculation over the Italian's future.

Conte was widely expected to be fired at the end of last term, in which the Blues surrendered their Premier League title with a limp fifth-place finish, although they did win the FA Cup.

Maurizio Sarri was said to have been lined up to take over at Stamford Bridge and it appeared to be a matter of time before a deal was confirmed when Napoli sacked him in May for taking too long to decide on his future.

But a contractual dispute with Napoli has reportedly prevented Chelsea from snapping Sarri up, leaving Conte at the helm after he regularly challenged the hierarchy's authority with comments about their transfer policy in the most recent campaign.

And Omnisport understands Conte was present at Cobham on Monday as Chelsea got their preparations for the 2018-19 season underway.

Conte, who is now into the final year of his contract, also spent much of the weekend at Chelsea's base.