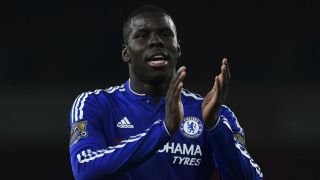 Chelsea head coach Antonio Conte says he will tread carefully with Kurt Zouma after he returned to training following a cruciate ligament injury.

The centre-back had become a regular in the Blues' first team last season, but saw his progress hindered after seriously injuring his right knee against Manchester United in February.

Zouma has joined in with parts of Chelsea's training during their pre-season camp in Austria as he steps up his recovery.

But Conte is keen to ease Zouma back into action and knows from experience the difficulty of coming back from such a serious injury.

"I am very happy to see Zouma train. Today [Tuesday] he started aerobic work for the first time with the group," he told a news conference.

"When we have a situation that is very difficult physically for him, we have to wait. I want the player to heal properly and stay fit for the rest of the season.

"He started the first training for the anaerobic session and he finished it very, very tired. But I am very happy for him. I think he is very happy to start feeling like a football player again.

"It is important that we don't push him. I had the same injury, so I know from personal experience that when the player is training [too hard, too early] it [can relapse]."