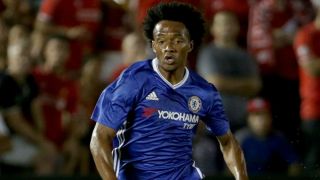 Chelsea boss Antonio Conte says he is waiting for clarity on Juan Cuadrado's future as he attempts to make further signings before the end of the transfer window.

The Colombia international spent 2015-16 on loan at Serie A champions Juventus but returned to Chelsea for pre-season, with Conte stating that he was keen to keep the winger at Stamford Bridge.

However, Juve CEO Giuseppe Marotta has claimed that the club are interested in another loan deal for Cuadrado, who was left out of Chelsea's 2-1 win over West Ham on Monday.

And Conte is keen for a resolution to the 28-year-old's future as he aims to bring in further reinforcements before August 31, with defenders Kalidou Koulibaly and Ricardo Rodriguez reported targets.

"It's difficult to speak about the transfer policy before the game," he said, speaking ahead of Saturday's Premier League clash with Watford. "We are waiting for the right solution to improve Chelsea. We need to sign some players.

"For Cuadrado, we're waiting. The situation about his position must be more clear. Now, he's a Chelsea's player, he had training with us."

Striker Diego Costa had been heavily linked with a move back to Atletico Madrid, but the Spain international impressed Conte in the game with West Ham, in which he struck the winning goal.

The former Italy boss admits that Costa's approach leaves him at risk of being punished by referees, but he is keen not to take the passion from his play.

"We all know Diego. He's a passionate footballer," he said. "Sometimes it can seem that he's always on the edge when he plays, but I think he's a good guy, a good player. He puts his passion into football when he plays.

"I'm happy with his attitude, his behaviour. But we know he must pay attention because sometimes when many players talk about one player, it's very difficult to play relaxed. You always stay at the centre of attention.

"We are both passionate, it's true. I risked being banned in my past sometimes. But when you show the passion for football, it's fantastic."