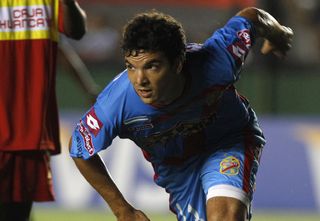 San Lorenzo midfielder Ignacio Piatti was sent off just before half-time with his team trailing 1-0 and goals after the break to Mariano Echeverria and Emilio Zelaya ensured Arsenal lifted the Copa Argentina trophy and claimed a berth in the 2014 Copa Libertadores.

Arsenal took the lead in the 37th minute on Wednesday when Nicolas Aguirre sent a looping header from outside the box past San Lorenzo goalkeeper Sebastian Torrico.

After Piatti was shown a straight red card for rough play in the 45th minute, Arsenal took control of the final in Catamarca.

They doubled their lead 10 minutes into the second half when Echeverria's header hit the back of the net.

With 23 minutes remaining, Zelaya's solo effort wrapped up Arsenal's victory and the Sarandi-based club lifted their third domestic trophy in the past two years.